Bridgemate shows BYE and won't continue to next round

From firmware version 2.1.1 onwards, Bridgemate II shows a BYE notification when there is a bye round, rather than skipping the round. This article goes int.

Bridgemate II firmware 2.0 and earlier versions skip a round whenever it was a bye round. For example, if round 2 was a bye, the Bridgemate would proceed immediately to round 3 after round 1 was completed. This wasn't alays made clear to the players and it had the disadvantage that the Bridgemate could be still used during the bye round, scores could be entered and other interaction was possible when it should not have been allowed.

From version 2.1.1 onwards, a modification was made. The Bridgemate now shows the word "BYE" and the device is blocked for further unauthorised interaction. 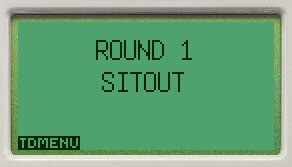 If multiple servers are used in the event (for example, when the event is played in several separate locations), each server should only contain those tables whose Bridgemates will connect to that specific server. If all the tables for the event are uploaded to all the servers, those tables having Bridgemates that are connected to another server don’t get their scores and remain in round 1. As a result, any tables displaying a “BYE” message don’t proceed to the next round. You can manage the tables individually in the Bridgemate Control Software, and can add or remove tables from the server. See chapter 3 of the Bridgemate II manual for more information.

Send feedback
Sorry we couldn't be helpful. Help us improve this article with your feedback.